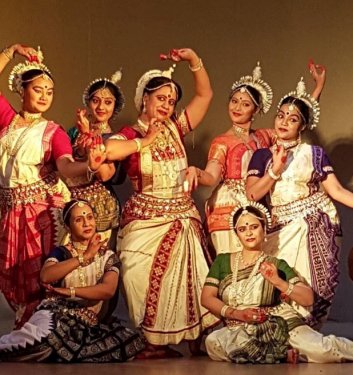 May 21, 2017No Comments on Review – Celebration of Water and Womanhood

The seven-storey step-well of Patan in Gujarat, its capital at that time, built by Queen Udaymati to commemorate her husband King Bhimdev’s memory in the 11th century, fully excavated in 1986 and declared World Heritage site in 2014, luxuriates in its 800 exquisite sculptures and speaks of the love, rulers and the common man had for art.

Inspired by the beautiful portrayals of apsaras doing shringara and women in artistic pursuits and in divine forms, Ahmedabad based Odissi dancer-choreographer Suprava Mishra did a bit of patient research for two years in consultation with scholars who have a name in the related area and produced a dance drama in her style with a longish title Queen’s Step-well, Celebration of Womanhood through Water, which her Aum Arts Academy presented on World Dance Day at Vishwakosh Bhavan, Ahmedabad.

Conceptually, she worked on an engaging analogy. What the fluid in the womb is to the unborn baby is water as from a step-well to a thirsty traveller. Ramji Savalia in his book on Rani ki Vav quotes a Vastu Shastra shloka: jeevanam vrikshajantoonam… The life of every tree and every creature is water. One who builds reservoirs, therefore, gets in return all comforts in this life and later in heaven. The queen’s initiative has such significance. She is not content with building the step-well. She has it made full of life with beautiful figures.

Choreographer Suprava celebrates both the sources – the source that nourishes life and the source that makes life worthwhile with feminine beauty and love, even with a third eye when required. Odissi has an affinity with the frozen movement in the sculptures of the step-well. Suprava endeavours to unfreeze it and has the Apsaras gracefully move and goddesses Saraswati, Parvati and Durga come to life. Earlier, Sheshasayee Vishnu and Dashavatara have been depicted. So are the elements of nature.

The interest that is generated by a promising beginning of the dance drama visually is sustained by the melodious music accompanying all its seven segments, at times on a single instrument. Dashavatara is given voice by Akhil Lenka, recorded three decades ago in Orissa. Monica Shah has freshly composed and sung five evocative kritis, including those for the three Goddesses. The rest are by Kirit Rajpara. The choreography in resplendent aharya is relatively better than the aspect of subtle abhinaya in the case of the dancers (Sucharita, Shikha, Prapti, Prakruti, Priyanka and Shraddha led by Suprava.) Admittedly, they need greater expressive depth. The text in Falguni Hiren’s well-modulated voice, preceding and during the performance, is pleasingly authentic.

The viewers having little exposure to Odissi visibly and audibly appreciated the performance with the satisfaction of having been familiar with the exceptionally good sculptures of the step-well and having recognized the characters depicted.

Dr. SD Desai, a professor of English, has been a Performing Arts Critic for many years. Among the dance journals he has contributed to are Narthaki, Sruti, Nartanam and Attendance. His books have been published by Gujarat Sahitya Academy, Oxford University Press and Rupa. After 30 years with a national English daily, he is now a freelance art writer.

Review – Celebration of Water and Womanhood